In which Petersen is missing and then trapped

When Burfit woke up on Saturday morning he asked if I’d seen Petersen. I had not.

It transpired that neither of us had seen her since Thursday morning. Both Baxter and Petersen disappear for what feels like quite a while from time-to-time but two days was getting straight into worry territory.

After breakfast Burfit set out with the treat bag, shaking it and calling Petersen’s name. After a fairly short search he found her.

She was stuck inside our neighbours’ house.

They must have gone away for a few nights and not realised that she’d snuck in. Our neighbours have security screens so they’d left the windows open which was nice, so at least she had air. But we weren’t sure exactly how long she’d been there or when they were coming home.

After Burfit came home and told me what he knew, we realised we only had the first name of the man next door. No surname. No contact number.

Burfit went back around the house to see if there was some sort of opening through which we could slide Petersen a dish of water or something when our neighbours’ daughter drove in – hooray! We hurriedly explained – she apologised – we apologised even more – and Petersen was free.

I went back around a few minutes later with paper towels and disinfectant in case there was anything of note to take care of but Anita (we have all their names and contact numbers now) told me not to worry.

Posted in petersen, stuff that happened

Please may I have?

Hello internet. Please may I have…?

We went away for a couple of days and left the kittens at my parents’ house where they are kept indoors. Since we brought them home they’ve been a little nuts, scampering around the house and the yard like mad things and generally enjoying their freedom.

This morning the youthful feline exuberance has continued with a fresh assault on the local lizard population.

The corpses are piling up and I don’t like it. 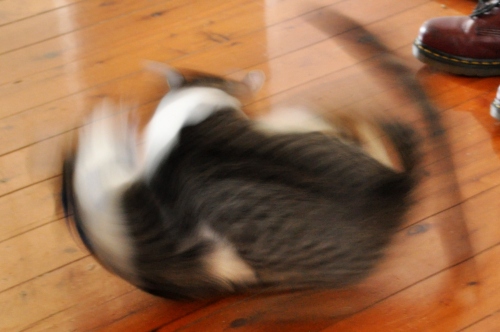